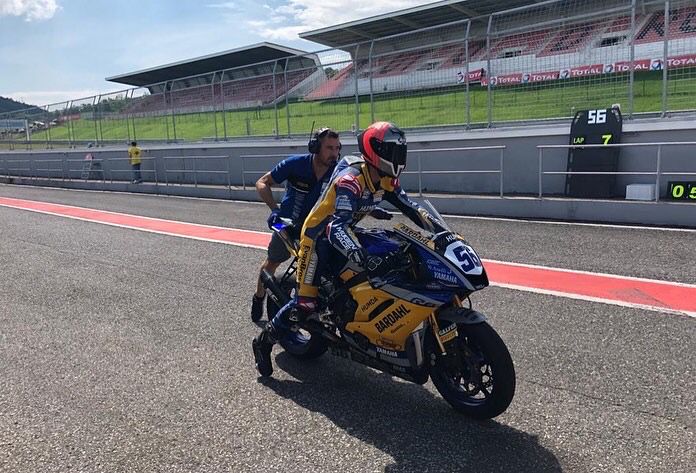 The Evan Bros. WorldSSP Yamaha Team's two-day test at the Most circuit ended today with excellent results, as the new line-up of the reigning World Champion team made its debut on the track. New signing Peter Sebestyen joined Steven Odendaal for the first time, and both riders were able to start discovering the secrets of the Czech track, which is a new addition to the 2021 WorldSBK championship calendar.
During the first day Odendaal, fresh from his excellent performance at Misano, regained confidence with his Yamaha YZF-R6, with which he has already won on three occasions, constantly improving his timesheets and obtaining also good responses from a physical point of view. Sebestyen on the other hand began to familiarise himself with both the team and the bike, completing a total of 44 laps with great enthusiasm.
Day 2 on Czech soil was unfortunately conditioned by bad weather, which raged for large stretches on the track. As a result, Steven and Peter could only take to the track for about an hour in the early afternoon, clocking up about twenty laps each, with Sebestyen author of a crash without consequences.
The Evan Bros. WorldSSP Yamaha Team is now ready to concentrate fully on the fourth round of the Supersport World Championship, scheduled on 23-24-25 July at the historic Dutch circuit of Assen.
Steven Odendaal: "I am satisfied with these two days of testing, even though the traffic and bad weather didn't help us. Yesterday it was really nice to get back on the bike after a little holiday, and today in the short runs we completed we worked with a view to the race, getting some useful information. Now we just have to start preparing for the Assen race, to be ready to express our full potential”.
Peter Sebestyen: "Before starting the test I was really excited, for many reasons, but now I can say that the first meeting with the team was really special. All the members are professional and with the right mentality, but at the same time they manage to make you feel like family. Since the first laps I found the bike fantastic, so it didn't take me long to get a good pace: then we started to work on the set-up and quickly got some improvements. I think we're on the right way and I'm sure we'll make further improvements before Assen. I feel really good, and I thank all those who have made this possible".
Fabio Evangelista (Team Principal): "We can certainly be satisfied with these two days of testing. On the first day we got to know the track, and at the same time the members of the new team started to take their first steps together with Peter, who immediately felt good both from a technical and human point of view. Today the rain limited our work programme, but it allowed us to make some further steps forward with both Odendaal and Sebestyen. Now the next challenge is Assen, and we are looking forward to it".