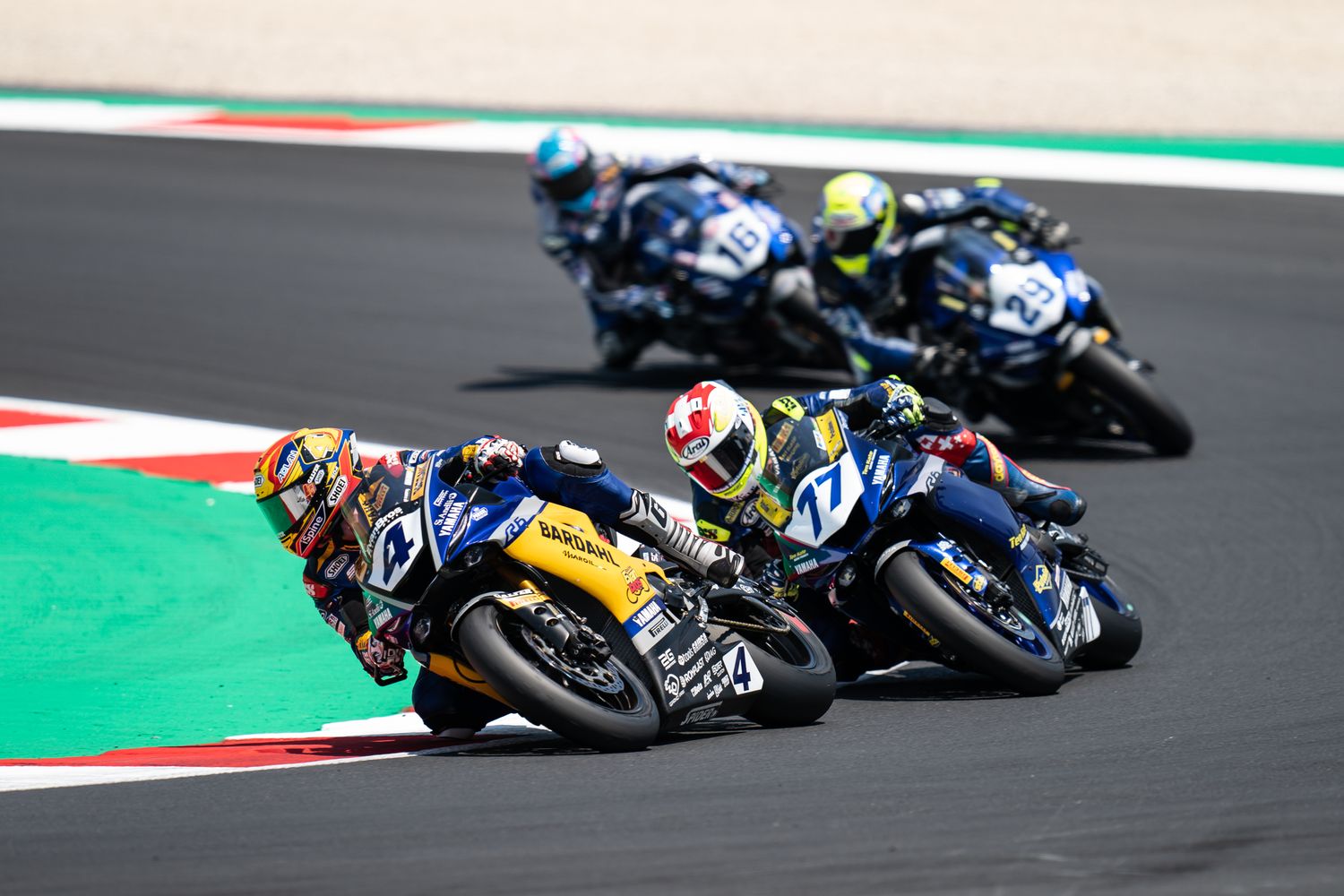 The Evan Bros. WorldSSP Yamaha Team was unlucky at Misano on Sunday, when a penalty cost them their fourth win of the season. In Race 2 Steven Odendaal deservedly took the chequered flag first, but a three-second penalty for not executing a Long Lap Penalty dropped him to fifth.
Day 3 at the Adriatic Sea started with the warm up, in which Odendaal and the reigning World Champion team made a general rehearsal in view of Race 2, recording eight laps. 1'38"422 the best time of the South African rider, who closed the session in fourth place, 217 thousandths from the first position.
In the late morning in Misano, with 31 degrees in the air and 47 on the asphalt, the lights went out for Race 2. Odendaal started well from the sixth position, taking the lead on lap four and holding it until the sixth lap, when the red flag was shown and the race was stopped. The race restarted at 13:00 with 12 laps remaining and Steven in pole position.
The South African made the most of his new starting position and was in first place from the start. During the race Odendaal defended his position very well, despite the presence of many opponents within a few tenths of each other: during this excellent conduct of the race Steven received first a track limits warning and then, a few corners from the start of the last lap, a Long Lap Penalty that he was not able to serve, while passing brilliantly first under the checkered flag.
For not executing the Long Lap Penalty Odendaal, as mentioned, received a three-second penalty, which dropped him to fifth place. In light of this result Steven retains second place in the championship, 17 points behind Aegerter. The Evan Bros. WorldSSP Yamaha Team will be back on track on 23-24-25 July at the Dutch Assen circuit.
Race 2 results #ITAWorldSBK
P1 - Dominique Aegerter (Yamaha)
P2 - Luca Bernardi (Yamaha)
P3 - Jules Cluzel (Yamaha)
P4 - Manuel Gonzalez (Yamaha)
P5 - Steven Odendaal (Evan Bros. WorldSSP Yamaha Team, Yamaha)
Steven Odendaal: "After the red flag it was not easy to regain concentration, but we managed to do it. Honestly I knew I had exceeded the limits of the track on one occasion, but the penalty was unexpected. Anyway, these are things that we can't control, and of course I regret losing the win, but I'm sure this will be an incentive for me and the team. I have to thank the team for the great work they have done all weekend, which has allowed me to get faster and faster every day. Now we look ahead, ready to give battle to our rivals, aware that the championship is long and there are still many points at stake".