Only bad luck stops Odendaal. Steven and the Evan Bros. WorldSSP Yamaha Team forced to retire in Race 2 at Estoril 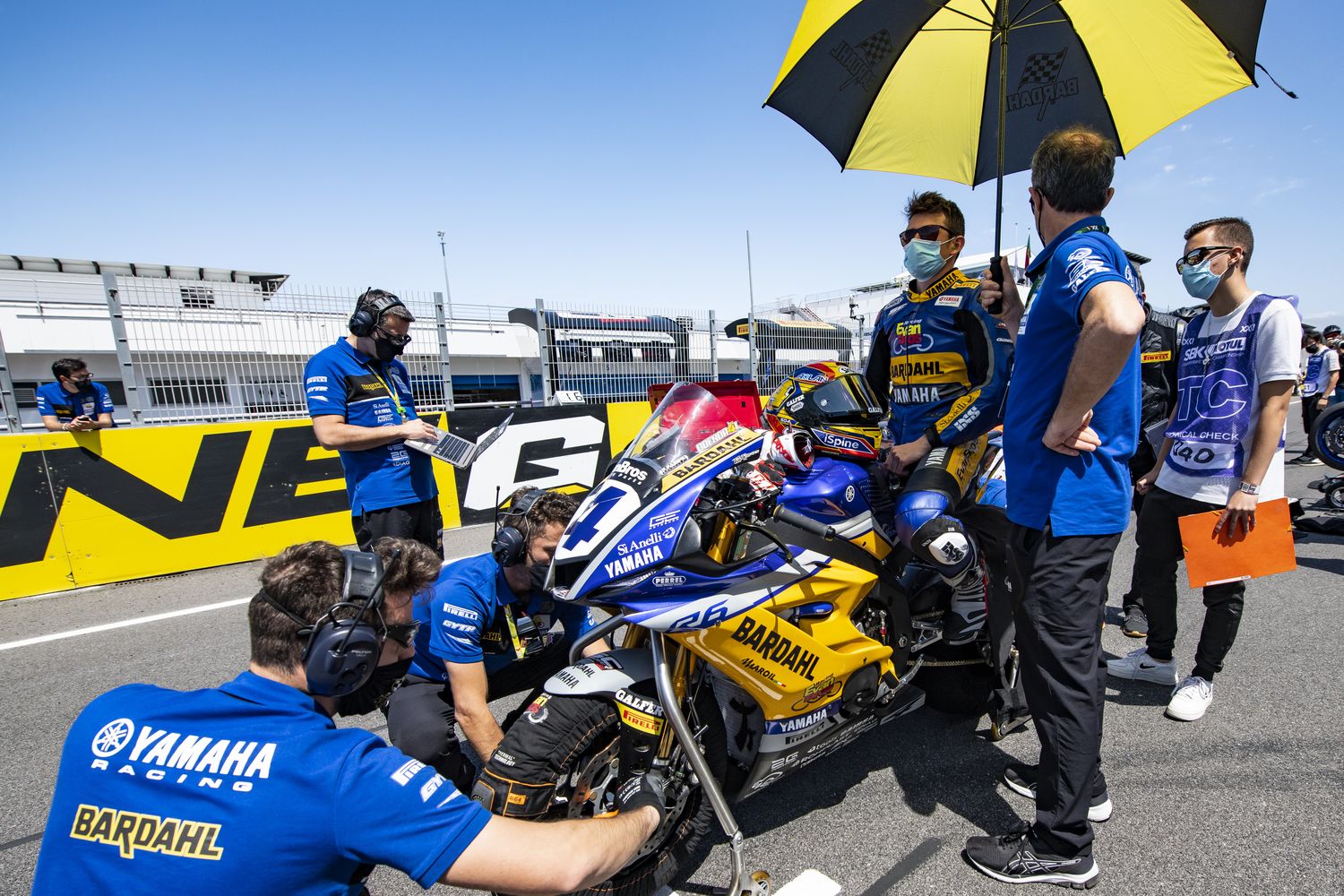 On a day tragically marked by the death of Jason Dupasquier, to whom the thoughts of the Evan Bros. WorldSSP Yamaha Team are directed, Steven Odendaal and the reigning World Champion team were forced to record their first retire of the 2021 season. In the last lap of Race 2 a technical problem forced the South African rider to retire.
Sunday at Estoril began for the Evan Bros. WorldSSP Yamaha Team with the Warm Up session, where Odendaal put in a total of eight laps, assisted by a pair of used tyres, ending the session in sixth place with a time of 1'40"587. Once the warm up was over, it was finally time for Race 2.
When the lights went out Odendaal got off to a good start from the third place, finishing the first lap in second position. In the middle part of the race the South African rider maintained his position, staying within the group fighting for the victory, formed at the beginning of the last lap by six riders.
On the final lap Odendaal was ready to attack for the lead when a technical problem at turn three forced him to slow down and retire. Despite this setback Odendaal remains at the top of the world championship, thanks to the splendid three victories obtained in the first three races of the year, with a six-point lead over Aegerter.
Now it is time for the Evan Bros. WorldSSP Yamaha Team, who are second in the overall team standings, just one point off the top, to analyse the vast amount of data gathered in the first two rounds and prepare for the third round of the season, scheduled for 11-12-13 June at Misano.
Race 2 results #EstorilWorldSBK
P1 - Dominique Aegerter (Yamaha)
P2 - Luca Bernardi (Yamaha)
P3 - Philipp Oettl (Kawasaki)
P4 - Manuel Gonzalez (Yamaha)
P5 - Hannes Soomer (Yamaha)
RET - Steven Odendaal (Evan Bros. WorldSSP Yamaha Team, Yamaha)
Steven Odendaal: "On the last lap I was fighting for the win, and I felt that I could take it again, when unfortunately a technical problem forced me to retire. The team is investigating the incident, but apart from that these things can happen and they should not destabilise us. The team has done a fantastic job since day one, and I'm sure this stop will only be a further stimulus. It's a bit early to be thinking about the championship at the moment, as we've only done 4 of the 24 rounds on the programme, so at the moment we just need to think about getting the best out of each weekend. Now it's time to rest, especially for the shoulder, and then to think about the next round in Misano".
Fabio Evangelista (Team Principal):
"We leave Estoril satisfied overall, although obviously sorry for the technical problem today. In three years with Yamaha we have never had a technical problem, but today probably fate wanted things to go this way. I am sure that Steven had what it takes to win again, which is a very good sign for the future. From tomorrow we will start thinking about our home round in Misano, where we want to get the
maximum out of it".