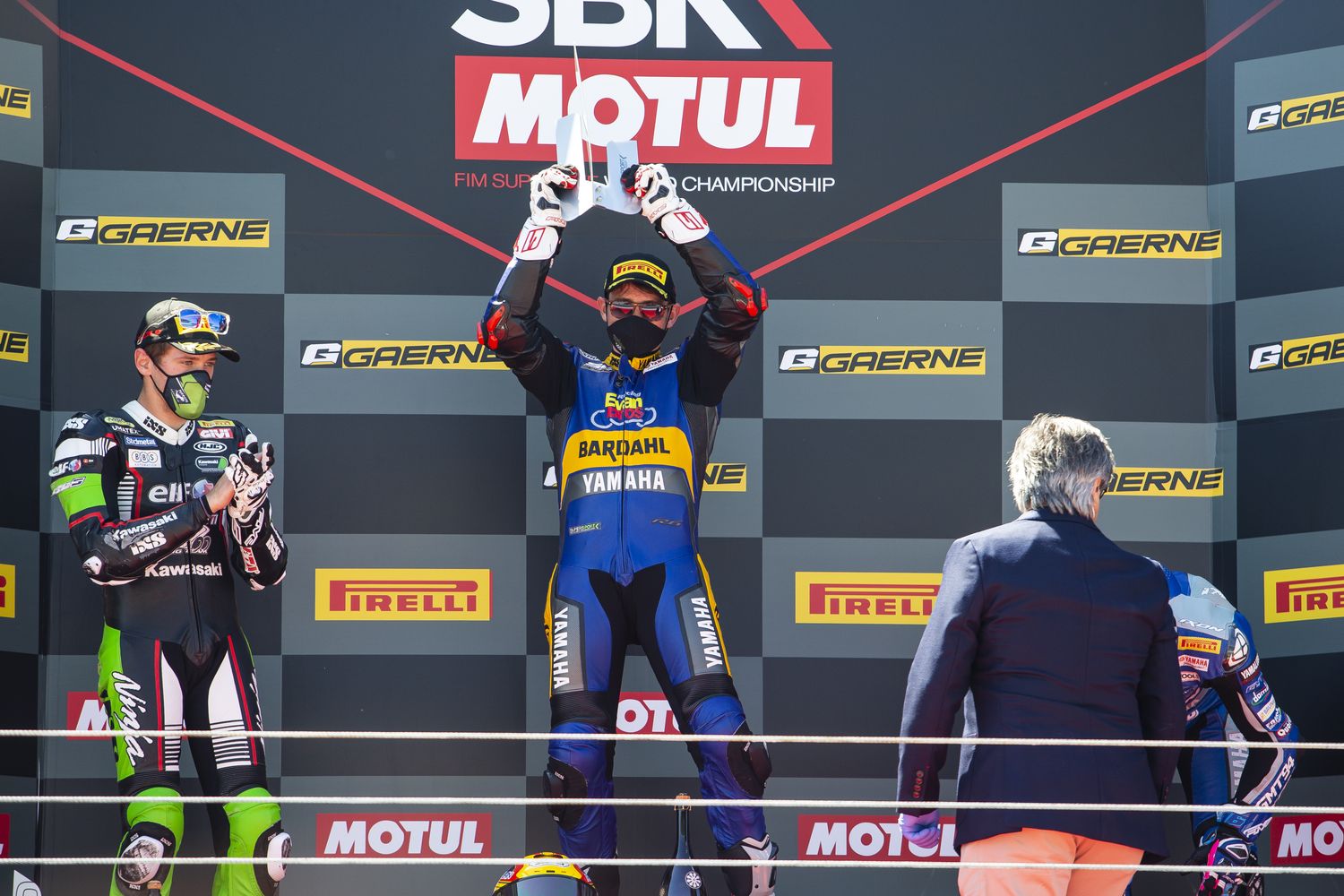 Steven Odendaal and the Evan Bros. WorldSSP Yamaha Team never cease to amaze. After the double win at Aragon, the Saturday at Estoril brought another joy to the South African rider and the team from Ravenna, who were able to win their third race in as many races. Once again the victory came at the end of a race with an uncertain outcome, where the rider's strategy and the speed of the bike played a fundamental role.
Odendaal and the reigning World Champion team started their day 2 by taking to the track for Superpole, in order to gain a good spot on the starting grid. After a slightly complicated start due to traffic, Steven was able to get the most out of his Yamaha YZF-R6 and new tyres, setting the third fastest time on the last lap with a time of 1'40"184, just two tenths from pole position.
At 16.15 Italian time Race 1 started, with Odendaal able to start in the best way, immediately conquering the first place. During the third lap the South African passed second, a position strategically maintained until the end of the race, where the fight for victory was reduced to four riders. At the start of the last lap Steven made his move, overtaking the momentary leader Oettl
and defending first place well until the chequered flag.
For the South African it was his third win in three races, which strengthens his first position in the overall standings, where he can count on a 31-point advantage over Aegerter. Tomorrow the Evan Bros. WorldSSP Yamaha Team will be back on track at Estoril, first for the Warm Up (10.25 Italian time) and then for Race 2, scheduled at 13.30 Italian time and visible live on Sky channel 205.
Superpole results #EstorilWorldSBK
P1 - Federico Caricasulo (Yamaha) 1'39"973
P2 - Philipp Oettl (Kawasaki) +0.121
P3 - Steven Odendaal (Evan Bros. WorldSSP Yamaha Team, Yamaha) +0.211
P4 - Jules Cluzel (Yamaha) +0.246
P5 - Dominique Aegerter (Yamaha) +0.318
Race 1 results #EstorilWorldSBK
P1 - Steven Odendaal (Evan Bros. WorldSSP Yamaha Team, Yamaha)
P2 - Philipp Oettl (Kawasaki)
P3 - Jules Cluzel (Yamaha)
P4 - Dominique Aegerter (Yamaha)
P5 - Manuel Gonzalez (Yamaha)
Steven Odendaal: "I started the race with the idea of pushing from the beginning, but when Oettl passed me I decided to follow him, to see if I could get some useful information, as I was particularly suffering in the last sector. Three laps from the end I decided to attack, as I was aware that there were some riders behind me and I wanted to avoid risks, but then I came back second. On the last lap I regained the first position, which I defended with all my might until the finish line. This victory is important for me, for the team and for the classification, which is shaping up in the best possible way. Tomorrow I just want to enjoy the race and see how it goes".