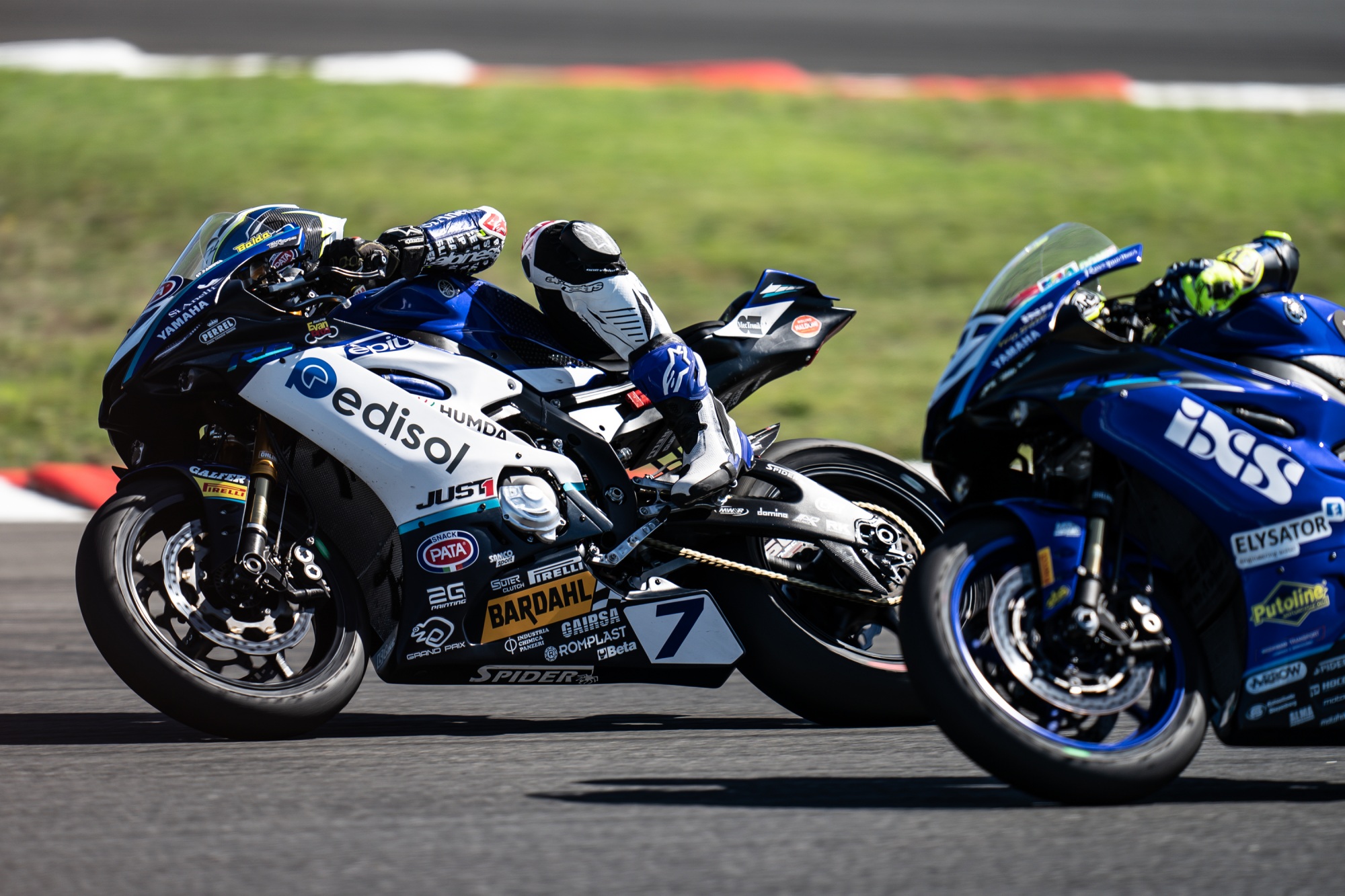 Unlucky Sunday for the Evan Bros. WorldSSP Yamaha Team, condemned to collect less than hoped for due to two crashes in turn 13. Lorenzo Baldassarri fought to the very last lap for the win, but had to settle for 5th place, while Peter Sebestyen ended the race 20th after occupying a place in the top six for large parts of the race.

In the morning Baldassarri and Sebestyen took to the track for the warm-up, where they settled the last things in view of Race 2. Lorenzo put in 8 laps, confirming his great form with a 3rd place finish. Peter, on the other hand, completed 9 laps, obtaining 12th place less than two tenths from the top ten.

At 12.30 it was time for Race 2. Starting perfectly from second place Baldassarri took the lead after a few corners, which he held until more than halfway through the race. In the final part of the race Lorenzo and Aegerter made a selection against the rest of the group, coming to play for the success in a thrilling head-to-head on the last lap: at turn 13 Lorenzo, in an attempt to cross his trajectory with that of his rival, crashed, but managed with determination to rejoin, finishing the race in 5th position.

A crash also complicated the plans of Peter Sebestyen, author of an excellent first part of the race, which had allowed him to occupy 6th position. On lap 16 Peter was the victim of a crash, also at turn 13: the Hungarian rider also managed to restart, finishing the race in 20th position.

As a result of the weekend's results Baldassarri remains second in the overall standings, 19 points behind the leader, while Sebestyen climbs to 21 points. In the team standings the Evan Bros. WorldSSP Yamaha Team maintains second position, on 288 points. The Evan Bros. WorldSSP Yamaha Team will be back on track from 23rd to 25th September, at the Spanish track of Barcelona.

Lorenzo Baldassarri: "It was a big shame. I kept a really fast pace, which I was partly not expecting, in a really demanding race. In the middle of the race Caricasulo and I got a bit annoyed, which allowed Aegerter to come back up: on the last lap I was preparing the final attack, with the situation under control, but in turn 13 changing trajectory led to my crash. It’s a shame, but the competitivity shown motivates us for the next races".

Peter Sebestyen: "I finally felt as strong as I wanted to, which made me really happy. Everything was coming easy for me, but maybe I pushed a little too hard, as I crashed. The result obviously doesn't satisfy us, but we’re ready to conquer good results”.

Fabio Evangelista (Team Principal): "We are obviously disappointed with the outcome of the race. Baldassarri did a great race, but unfortunately a crash compromised everything. His fast lap in the race confirmed his speed: he now has a similar gap in the overall standings to the one he had at the start of the weekend, so nothing is lost, also because there are still so many rounds to go. Sebestyen confirmed the improvements of the last few races, a sign that he has found the right setup, but even for him a small mistake was fatal. It was not our day, but the potential to aim high is not missing, so we are very confident".