Andrea Locatelli king also in the wet: powerful victory in Race 1 at Magny - Cours and new points record in a single season 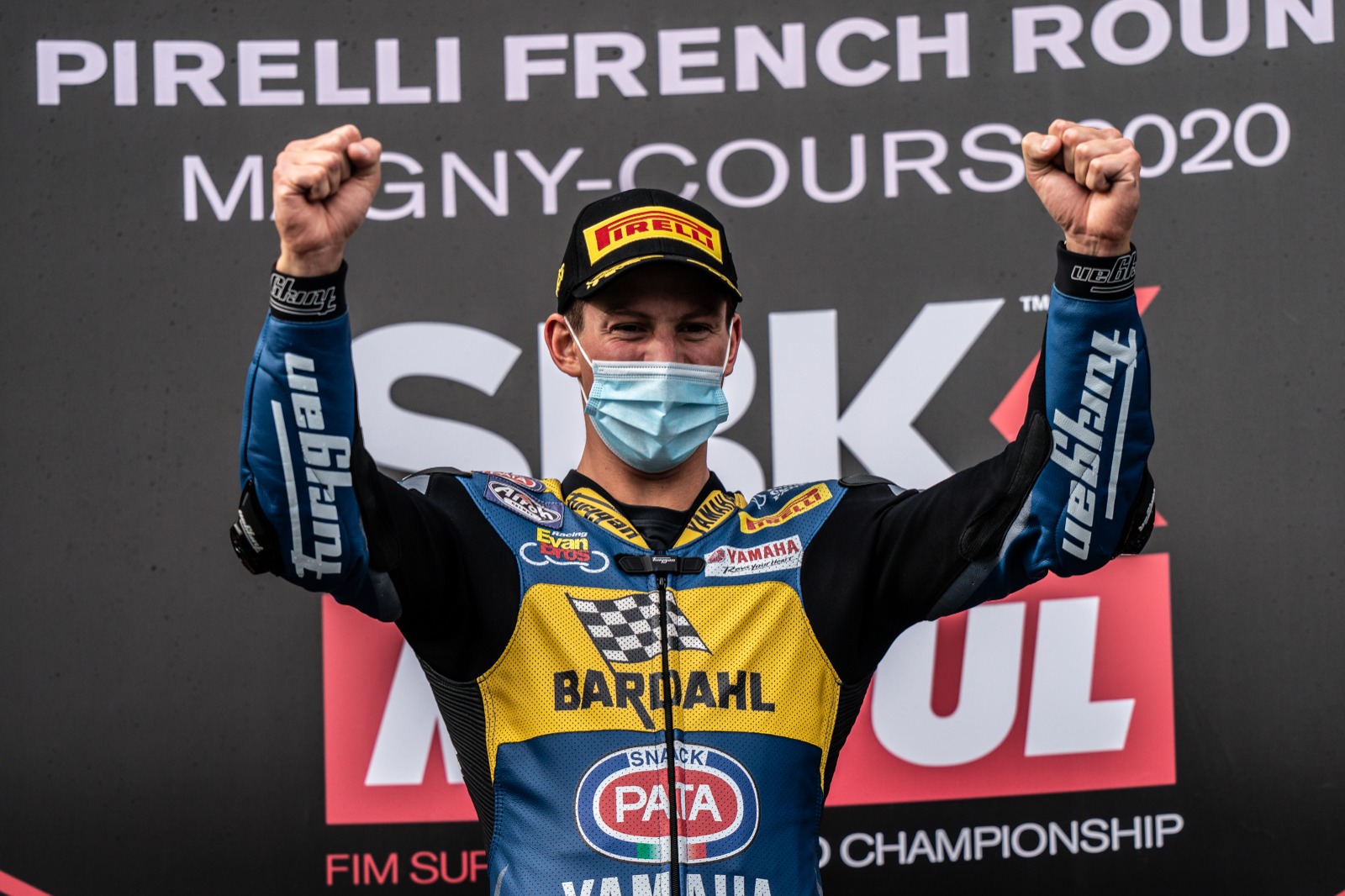 Perhaps only a victory in the wet was missing to crown this wonderful season in an even better way, and also this objecrive has been achieved. On the wet track of Magny - Cours in fact the BARDAHL Evan Bros. and Andrea Locatelli won Race 1, adding another pearl to the 2020 collection.
The day opened under the sign of bad weather, which also today made the asphalt wet for the whole duration of the day. In the morning FP3 Locatelli obtained the first position thanks to a time of 1'55"293, while a few hours later it was time for the Superpole. This was done on wet but drying asphalt, which partly mixed the situation.

Locatelli improved his time during the session, until he obtained the fourth position thanks to the time of 1'50"281. In the early afternoon the traffic lights went out for Race 1, race on completely wet asphalt: the 2020 World Champion started in the best way, managing to reach the first position already in the first lap. In the following passages Locatelli, together with Mahias, managed to make the difference against the rest of the group, without ever losing the lead of the race.
At the end of the race Andrea managed to take a safety margin over his rival, which allowed him to stay in first position until the penultimate lap, when the red flag was displayed due to the fall of Van Straalen, which decreed the end of the race and Locatelli's victory. With this success the number 55 reached 11 victories in 12 races raced, and set a new record: with 288 points in fact Andrea set (one round early) the record of points obtained in a single season, breaking the previous record of 276 points set in 2007 by Kenan Sofuoglu.
Tomorrow the World Champion duo will be back on track again for the warm up, and then (12.30) for Race 2. This will be live on Sky Sport MotoGP, channel 208 of the Sky platform.
Superpole results #FRAWorldSBK
P1 - Kyle Smith (Yamaha) 1'49"318
P2 - Lucas Mahias (Kawasaki) +0.149
P3 - Manuel Gonzalez (Kawasaki) +0.746
P4 - Andrea Locatelli (BARDAHL Evan Bros. WorldSSP Team, Yamaha) +0.963
P5 - Raffaele De Rosa (MV Agusta) +1.259
Race 1 Results #FRAWorldSBK
P1 - Andrea Locatelli (BARDAHL Evan Bros. WorldSSP Team, Yamaha)
P2 - Lucas Mahias (Kawasaki)
P3 - Hannes Soomer (Yamaha)
P4 - Raffaele De Rosa (MV Agusta)
P5 - Kevin Manfredi (Yamaha)
Andrea Locatelli: "Being able to win in the wet is incredible, I'm really happy. Honestly I thought it was difficult to get it, since the feeling during the free practice sessions were not always optimal, but for the race my team gave me a really perfect bike, which allowed me to push a lot of times. I'm also very happy for the new record achieved: it's always nice and exciting to go down in history. Tomorrow I hope to be able to repeat this result, also thanks to the information gathered today, but it will certainly be another tough challenge".