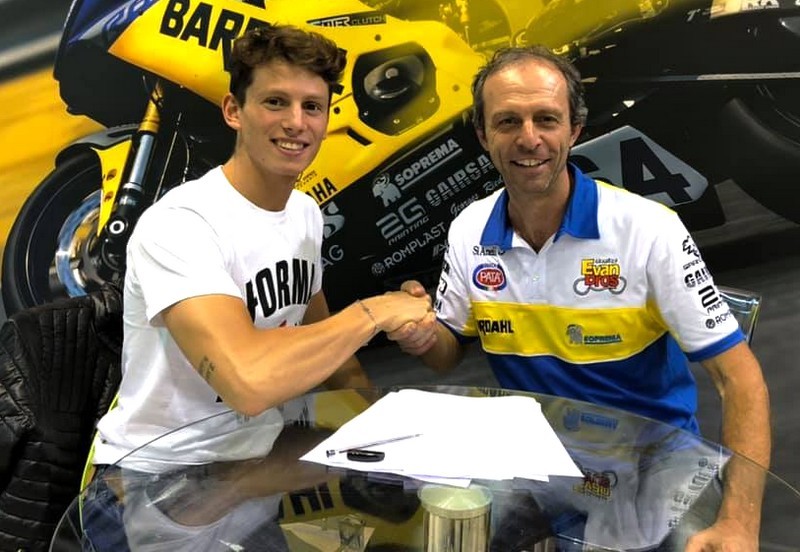 The Bardahl Evan Bros. World SSP Yamaha Team is pleased to welcome Andrea Locatelli, who will compete in the Supersport world championship in 2020 with the Yamaha YZF R6 of Fabio Evangelista’s team.
Born in Alzano Lombardo (BG) on 16 October 1996, Andrea began to race as a youngster and already won the Moriwaki 250 Trophy in 2011, while the following year saw him win the Trofeo Honda NSF250R. In 2013, he joined team Mahindra Racing and was crowned Italian Moto3 champion. In 2014, he debuted in the Moto3 world championship, where he remained until 2016, a season in which he reached the podium on two occasions, in Germany and Australia. The following year he moved up to Moto2, while in 2020 he will make his debut in the Supersport world championship with the 2019 World Championship winning team.

Andrea Locatelli: “I’m really pleased to begin this new chapter of my racing career in the Supersport world championship, and I’m happy to be able to do so with the Bardahl Evan Bros. team,, the current world champions and a winning team that, like me, has big ambitions for next year. This change gives me renewed motivation and I can’t wait to get on my new bike and pay back Fabio Evangelista and Mauro Pellegrini the faith they are putting in me”.

Fabio Evangelista – Team Principal: “I’m really pleased to be able to welcome Andrea Locatelli to our team, a rider with whom we can compete at the top level in the Supersport world championship. We will soon start work in preparation for the 2020 season, with a two-day test on 28-29 November at the Jerez track in Spain. Andrea will have to adapt to our bike and the Pirelli tyres, that he’s never used before, and during the season he’ll also come up against some new tracks. Despite his young age, Locatelli already has a wealth of international experience, racing in the Moto3 and Moto2 championships and so we’re sure that he’ll overcome these obstacles with ease. As ever, the relationship with our title sponsor Bardahl Maroil has been key during this process, as without their support we wouldn’t have been able to achieve the results we have. Our heartfelt thanks go to them, and to all our sponsors for their continued support. I also want to thank Yamaha Motor Europe in the form of Andrea Dosoli, and sponsor Pata, and it is also thanks to them that Locatelli is now part of our team. I must of course mention our 2019 riders, who have brought us so much satisfaction and written a fantastic page in our team’s history books. My best wishes then to world champion Randy Krummenacher, who will be one of our rivals next season, and Federico Caricasulo who moves up to Superbike. Two great riders who we are proud to have brought to the pinnacle of World Supersport”.