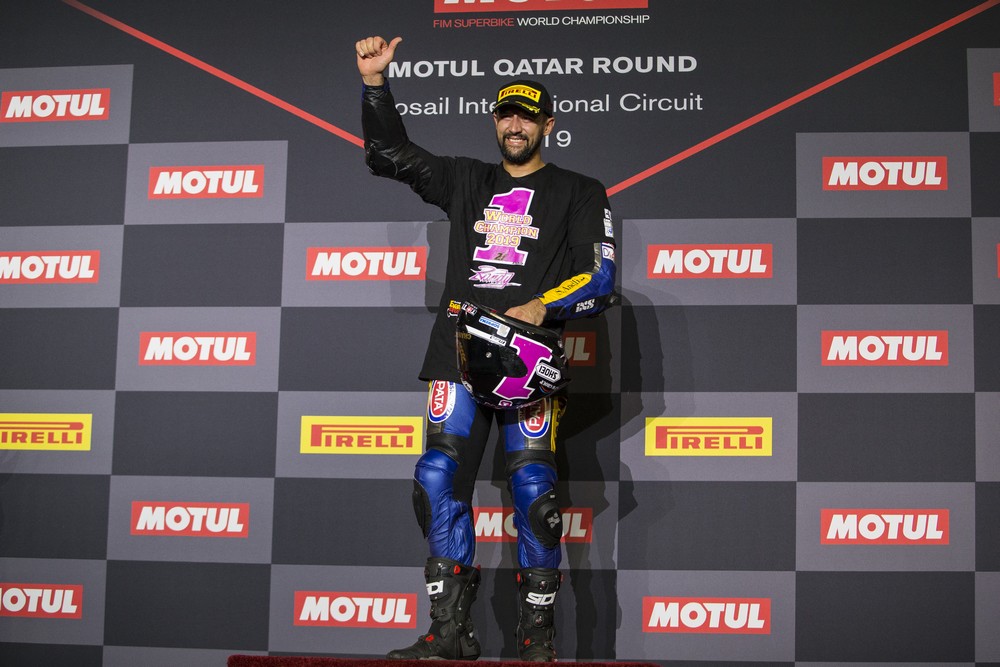 The twelfth and final round of the Supersport World Championship, the decider in terms of assigning the world title, has concluded at the Losail International Circuit in Qatar.
The Bardahl Evan Bros. riders, Swiss Randy Krummenacher and Italian Federico Caricasulo, arrived at this crucial round having dominated the season and lying first and second in the championship standings, Krummenacher first with 202 points, followed by Caricasulo with 194.
The supremacy of the Bardahl Evan Bros. riders was once again confirmed in yesterday’s Superpole, during which Federico secured pole position, followed by Krummenacher. The pair therefore started from the front row of the grid, the racing getting underway at 5.15pm local time, earlier than originally planned due to the chances of rain later in the evening.
Caricasulo made a good start from pole, followed by Krummenacher, and both were immediately part of the leading group. At the end of lap two, Randy was fourth and Federico seventh, at the back of the leading pack. With one eye on the race and one on the championship, the two Bardahl Evan Bros. riders lost contact with the front three and began to run a tactical race. On lap seven of 15, Caricasulo was lying fifth, followed closely by Krummenacher who, boosted by his championship lead, knew that his only rival was his team-mate.
During the final phase, and having battled with Perolari, both Federico and Randy passed him, crossing the line in fourth and fifth place respectively. The fifth-place finish, and resulting 11 points, saw Krummenacher climb to 213 in the general standings and secure the title of 2019 Supersport world champion!
Crossing the line fourth, Caricasulo earned 13 points, confirming second place in the championship with 207 points.
The best possible ending then to a season that has seen the domination of Bardahl Evan Bros., the team having won seven of the twelve races and scored a total of 17 podiums, and its riders having topped the overall standings.


Randy Krummenacher: “This is an incredible day for me. The race was very difficult. At the start, I think I could move to the front but I didn’t find the right feeling with the bike to be able to push any harder than I did. Over the last laps, I was thinking more about the championship than the race and I was careful not to make any mistakes. I’ve worked for 24 years with the goal of becoming World Champion and today I did it. To tell the truth, it hasn’t sunk in that I’ve won the Supersport title yet, it still seems incredible. It was a very tough season and I have to thank many people, starting with my family who have helped me through the difficult times. Thanks to everyone on the team for all their hard work and for helping me win this title”.

Federico Caricasulo: “It wasn’t the race I expected, but I’m fine, as I know I gave it my all. I pushed hard right frmo the start, trying to stay ahead of Randy and put as many riders as possible between me and him, but he did well and kept pace. In the final stages, I battled with Perolari despite a small technical problem that slowed me. It’s been a great season anyway, one in which we’ve always run up front. I’m sorry I didn’t win the title for my team, after all their hard work, but that’s racing and we must accept the track’s verdict”.

Fabio Evangelista – Team Principal: “I’m so happy and excited. This race is a fitting end to a season in which we have played a starring role throughout, thanks to the work of our whole team and the talent of our two riders. I’m very pleased for Randy who, as well as being extremely fast, has shown to be a mature rider, able to manage the pressure that comes from leading the championship from start to finish. I’m obviously disappointed for Federico, but I know he’s done all he could in fighting his team-mate for the title, a very fair duel between two great riders. In this happy time, my thanks go to all our fans our sponsors who have made this great victory possible!”