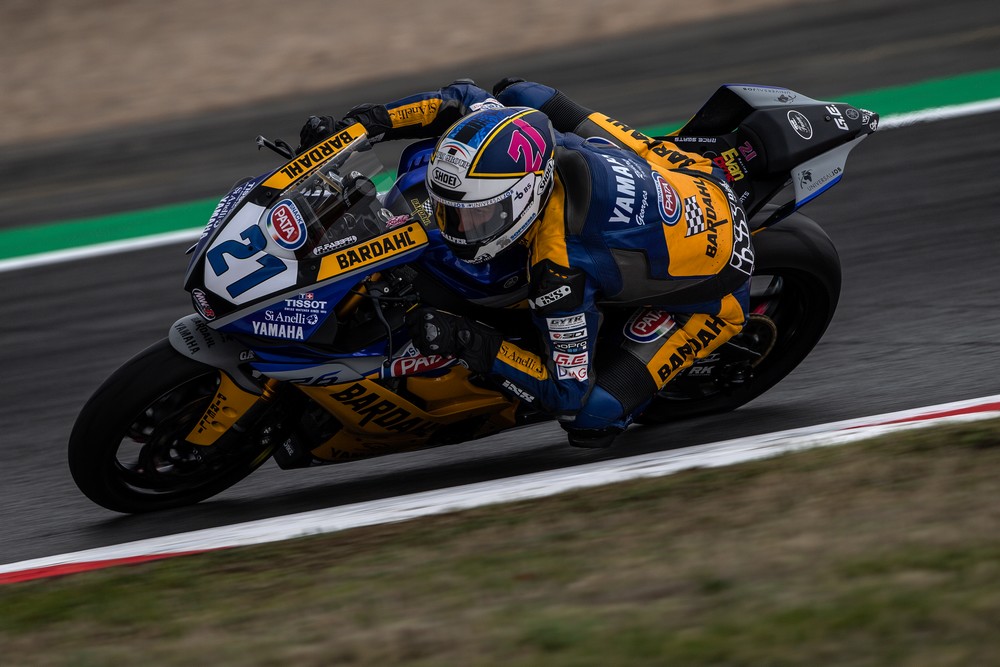 Team Bardahl Evan Bros. is at the Nevers Magny-Cours track in France for round ten of the Supersport world championship. With only three races to go this season, Fabio Evangelista’s riders, Swiss Randy Krummenacher and Italian Federico Caricasulo, lie first and second respectively in the general standings, with 193 and 183 points.
This morning saw both take to the track for the first free practice. On a partly wet track following rain overnight, Caricasulo and Krummenacher did not want to risk a crash, completing only a few laps as they began work on the set-up of their Yamaha YZF-R6 machines. The Italian closed in ninth place with a time of 1’47”153 while the Swiss rider finished in eighteenth position with a time of 1’50”224.
The second session played out this afternoon in very heavy rain, the conditions particularly difficult. In light of tomorrow’s forecast, which does not promise rain, the two Bardahl Evan Bros. riders did not focus on lap times but worked instead to identify a good set-up for their bikes in the wet. Setting a best of 2’04”477 Krummenacher positioned seventh at the end of the session, Caricasulo ninth with a time of 2’04”828.
In the combined standings, Caricasulo retained ninth place and Krummenacher eighteenth.
Tomorrow will see the pair take part in the third and final practice, preparing for the subsequent Superpole which will establish grid positions for Sunday’s tenth race of the season.

Randy Krummenacher: “It’s been a strange day. We only made a few laps, but in the end I found good feeling with my bike in the rain, and I set a good lap time without pushing too hard. Now we know where we need to work in case of rain. Tomorrow the weather should be much better and so we’ll work on our dry set-up in preparation for the race. Thanks to my team for all their help today”.

Federico Caricasulo: “This morning we made just a few laps on a half-wet track, while this afternoon we tested the bike’s wet setting. In the rain, we’re not there yet, but tomorrow should be dry and so we’ll be faced with different conditions. I’m confident ahead of the rest of the weekend because I know my team will help me to come up with a competitive Yamaha once again”.

The full schedule for the French round can be viewed at this link:
http://www.worldsbk.com/en/event/FRA/2019