Caricasulo wins the WorldSSP race at Portimao ahead of Krummenacher 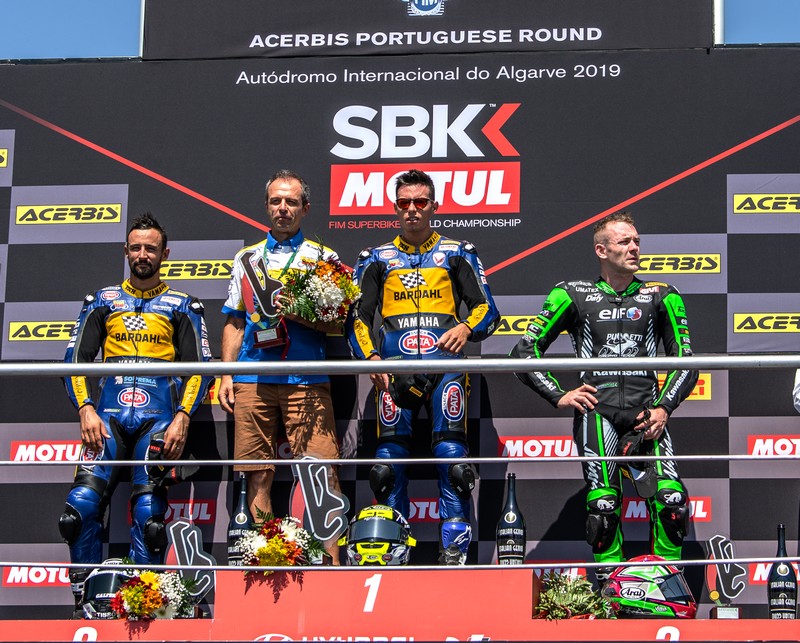 The Bardahl Evan Bros WSSP Team has concluded round nine of the Supersport world championship at the Autodromo Internacional do Algarve in Portimao, Portugal.
Both in practice and Superpole, Federico Caricasulo and Randy Krummenacher once again demonstrated their full potential and that of the Yamaha R6 too, particularly well prepared by the technical staff of Fabio Evangelista’s team.
In yesterday’s Superpole, Caricasulo scored his third pole position of the season (the seventh of his career), also improving on the Portuguese track’s best lap. Federico closed ahead of his team-mate who is still not 100% following the crash he suffered during Friday’s practice.
The two Bardahl Evan Bros. rider therefore lined up on the front row of the grid for today’s 18-lap race, which took place in hot and sunny conditions.
Thanks to a very fast start, Caricasulo moved into the lead while Krummenacher was lying fifth during the opening laps. The Italian retained the race lead, while Randy made a recovery that saw him move up behind his team-mate. During the course of lap twelve, Krummenacher passed Caricasulo to move into the lead. A few laps later, Federico passed the Swiss rider, just as race direction stopped the race with a red flag due to oil on track. With two thirds of the 18-lap distance already run, the race was considered complete.
The win therefore went to Caricasulo, who preceded Krummenacher by just three tenths of a second, in a race that saw the two Bardahl Evan Bros. riders dominate.
In the championship standings, Krummenacher confirms his lead with 193 points, followed by Caricasulo on 183.
With today’s results, the Bardahl Evan Bros WSSP Team has already won the 2019 best team title, with three rounds still to go. Important recognition for the work completed by the Italian team.
The next round of the Supersport world championship is set to take place over the weekend of 27-29 September at the Nevers Magny Cours circuit in France.

Randy Krummenacher: “We weren’t able to win but we should be pleased with second place because we saved a weekend that was tough right from Friday. The only mistake I made today was to let Federico take the lead, thinking I could beat him in the final stages. An unexpected red flag then arrived and mixed up the race. Congratulations to him as he did a great job. As for me, I’m pleased with second, also because I felt good on the bike and was aware I had a little more than all my rivals. Now we go to Magny Cours to win. Thanks to the team as they’ve done an exceptional job”.

Federico Caricasulo: “I expected this kind of race and knew I’d have to deal with my team-mate and Mahias. Unfortunately, the red flag brought the race to a premature conclusion and I’m sorry because I could have won without that interruption but that’s the way it went. Now we look ahead to what will be three tough rounds, but I head into them calmly and safe in the knowledge that I can fight for the positions that count. I want to thank the team as they’ve done a fantastic job once again here”.