Third Superpole of the season for Caricasulo at Portimao. Second for Krummenacher 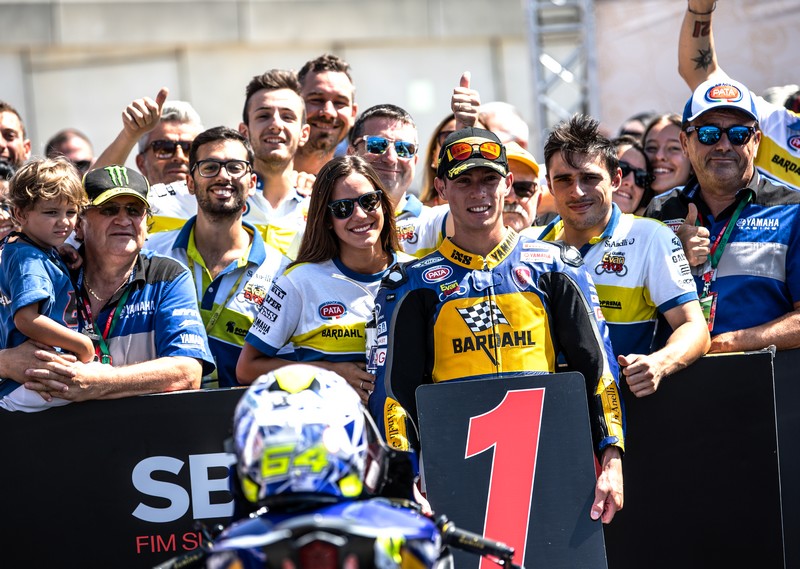 Team Bardahl Evan Bros. have completed day two of practice and Superpole making up round nine of the Supersport world championship.
During yesterday’s two free practice session, Italian Federico Caricasulo and Swiss ridero Randy Krummenacher once again proved to be the protagonists of this 2019 season. With a time of 1’45”160, Caricasulo scored first place, just ahead of his team-mate Krummenacher, who set a 1’45”498 despite a crash in session one, which left up with a deep cut to his left knee and a fractured big toe.
This morning, in sunny conditions, the third and final practice played out, Caricasulo able to further improve on his best time and finish first once again (1’44”853), topping the timesheets in terms of the sessions’ combined results too. Krummenacher also did better than yesterday and with a time of 1’45”410 he finished in fifth place in both the session and overall.
In the late morning, the Superpole took place, a session in which Caricasulo set an exceptional time of 1’44”220, a new lap record at the Portuguese track, beating the previous time that was set back in 2015, and scoring his third Superpole of the season. Despite being in pain, Krummenacher achieved an excellent second-place finish with a time of 1’44”664. As a result, Caricasulo will line up on the front row of the grid alongside team-mate Krummenacher in tomorrow’s 18-lap race.

Randy Krummenacher: “Yesterday’s crash complicated things a little and left me with a fractured big toe, which is very painful and meant I had to be treated at the Clinica Mobile. Today I had good feeling with the bike and I really pushed for the front row in Superpole. We’re in the final stages of the season and I’m fighting for the world title, so I’m highly motivated and really want to do my best to achieve my goal. A big thank-you to my team that has once again provided me with a competitive bike today”.

Federico Caricasulo: “I’m really pleased with pole position. We worked hard during yesterday’s practices to be fast over both the flying lap and race distance, and today we saw the fruit of our labours. For tomorrow’s race, we still need to make some final touches to the bike, but nothing drastic as we’re already fairly happy. I expect a tough race and think my main rival will be my team-mate. Thanks to my team for all their help again today”.