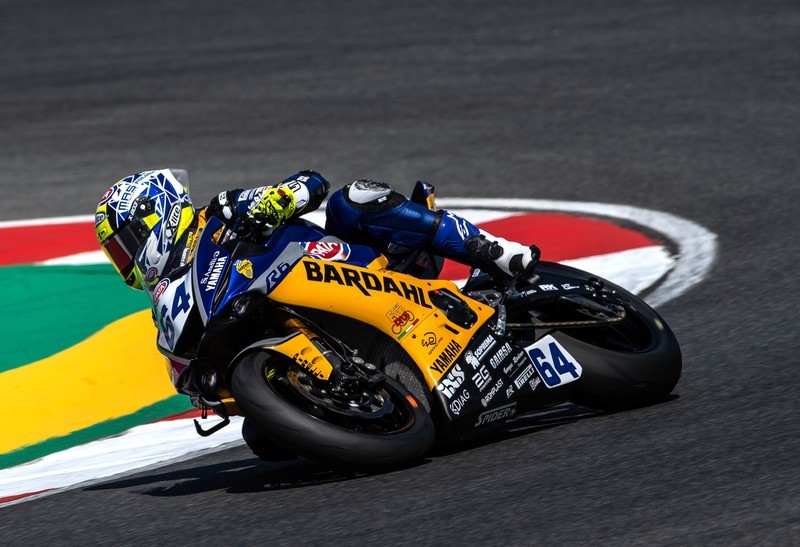 After completing a two-day test roughly two weeks ago, the Bardahl Evan Bros. team is now back at the Autodromo Internacional do Algarve in Portimao, Portugal for round nine of the Supersport world championship.
Exploiting the work carried out during the test, both Randy Krummenacher and Federico Caricasulo were immediately fast in this morning’s first free practice, which played out in warm and sunny conditions. Despite a crash in the final stages, Krummenacher set the fastest time, a 1’45”498, while Caricasulo finished right behind him teammate with a 1’45”777.
During the afternoon’s session, and despite decidedly higher temperatures, Caricasulo improved on his best by seven tenths, finishing in first place with a best of 1’45”160. Also due to this morning’s crash, Krummenacher was unable to improve further (1’45”757) and concluded in second place at the end of day one.
Tomorrow morning, both Bardahl Evan Bros. riders will take part in the final free practice and then Superpole, which will establish the grid positions for Sunday’s race.

The full schedule for the Portuguese round can be viewed at this link:
http://www.worldsbk.com/en/event/POR/2019

Randy Krummenacher: “Generally speaking, it’s been a positive day, during which I was consistently fast in both sessions, despite the crash this morning, which left me with a little pain but luckily I did no serious damage. The team has worked really well and in the second sessions they gave me a really high-performing bike as always. I needed the second session to regain the feeling with the bike and now I can say I’m ready for tomorrow’s Superpole”.

Federico Caricasulo: “We’ve made a positive start, working 100% in preparation for Sunday’s race. It will be another difficult weekend, but we are working well and are finding a really fast race pace. I’m not too worried about the heat, because I feel good physically. In Superpole, we’ll give it our all, with the aim of scoring a front row start”.