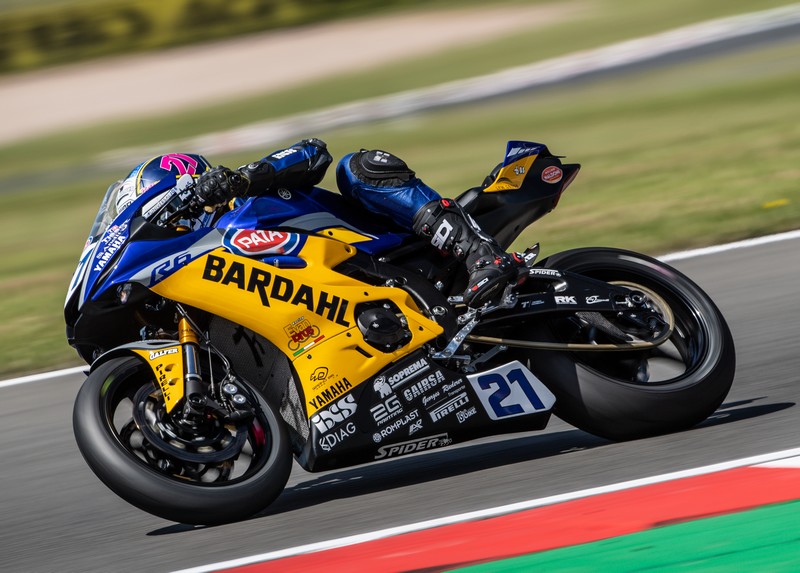 Team Bardahl Evan Bros. is in the UK and, more precisely, the Donington Park track in Leicestershire for round eight of the Supersport world championship.
In the last event at Misano Adriatico it was Randy Krummenacher who scored victory, ahead of team-mate Federico Caricasulo. The two Bardahl Evan Bros. riders come to the UK as championship leaders, the Swiss rider in first place with 160 points and the Italian second on 138.
This morning, in cool and sunny conditions, the pair were out on track for first free practice. With a time of 1’31”668 Krummencher scored third place, while Caricasulo, who crashed mid-session which caused him to lose valuable time in the garage, finished sixth with a best of 1’32”054.
In the afternoon’s second practice session, both Bardahl Evan Bros. riders were able to improve on their fastest times. Setting a 1’31”078, Krummenacher finished in second place overall, while a solid 1’31”399 saw Caricasulo obtain fifth place.
Tomorrow morning will see the pair take part in the third and final practice session. The afternoon will bring the Superpole, which establishes grid positions for Sunday’s race.

View the full Donington Park schedule at this link:
http://www.worldsbk.com/en/event/GBR/2019

Randy Krummenacher: “Today went well. During the two sessions we tried some different new things and definitely still have room for improvement. We are working in the right direction, very methodically, and so we will be ready for Superpole and Sunday’s race. Thanks to my team for their excellent work today”.

Federico Caricasulo: “A tough day, mainly due to this morning’s crash which caused us to lose half the session. We are behind with the work we had planned, but we know what we need to do and so I’m confident for the rest of the weekend. Thanks to our technicians who really helped me again today”.